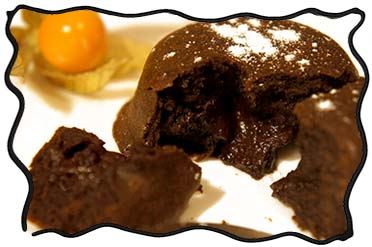 There seems to be a kind of mystery in a liquid chocolate slowly flowing out from a chocolate lava cake. Maybe because it reminds a volcano and real lava, slow and hot, flowing from a mountain top, like one of those surrounding ancient Aztec settlements where they first discovered the magic of cocoa beans. Where they were bringing their sacrifices to ancient gods and where hot chocolate was prepared for Montesuma for the first time. Thanks to that wonderful discovery we have a chance to enjoy chocolate and gorgeous lava cake nowadays.

Or maybe the mystery is its similarity with a chocolate river like the one in Willie Wonka’s factory, with strange and funny creatures hanging around and doing their job for the important business of magic chocolate manufacturing.

Or maybe it is in the chocolate darkness – darkness usually means mystery, like the night falling down the earth slowly. Who knows, maybe for somebody it is a piece of a night with its wonders, miracles and dreams coming true right after tasting a bit of chocolate filling and feeling the dawn of a blissful taste on your tongue!

Chocolate lava cake is pretty young. Its history has started in the end of the 20th century: Jean-Georges Vongerichten, a French chef living in New York claimed to have invented molten chocolate cake in New York City in 1987. Another French chef and chocolatier Jacques Torres has disputed the claim, arguing that such a dish already existed in France. According to Vongerichten, he pulled a chocolate sponge cake from the oven before it was done and found that the center was still runny, but was warm and had both a good taste and a good texture. Whoever was the inventor chocolate lovers all around the world are happy to enjoy the pastry masterpiece today.

Got your own one of a kind serving suggestion? We will be happy if you decide to share it with us and recieve your deserved compliments!

How To Cook Chocolate Lava Cake?