Coffee Cake
It All Started With The Coffee 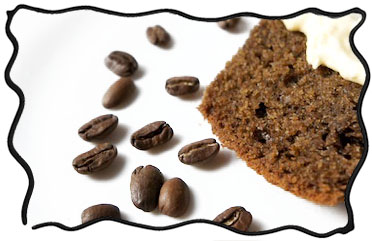 Actually any cake consumed with coffee can be a coffee cake. Europeans made this simple discovery in the 17th century when they first tasted coffee and it is a good tradition nowadays.

It is curious that first coffeehouse was established in Paris by an Armenian named Pascal in 1672 and was ultimately unsuccessful. In 1686 an Italian Procopio Cutò, who is also famous for inventing ice cream machine, made a second attempt to introduce coffee in France and opened the Café Procope. It still exists now in Paris and is one of the oldest restaurants in the city. In 1686 it started as a café where gentlemen of fashion might drink coffee, the exotic beverage that had previously been served in taverns, or eat a sorbet, served up in porcelain cups by waiters in exotic "Turkish" garb. For its more that 300 years history the place has become a legend and welcomed famous coffee lovers including Voltaire, Rousseau and Denis Diderot, later Benjamin Franklin, John Paul Jones and Thomas Jefferson and many others.

Nowadays the first place where the Europeans first tasted coffee suggests its visitors chocolate cake, tiramisu, profiteroles and crepes flambé as a supplement for the coffee.

Approximately at the same time in Germany the Kaffeeklatsch tradition evolved. It smoothly appeared in the kitchens where there was always a pot brewing on the back of the stove that Scandinavian hospitality and coffee became synonymous. The term coffee klatch became part of the language meaning “a moment that combined gossip with coffee drinking.” It was changed to define the American version of England's tea, a midmorning or midafternoon gathering at which to imbibe and ingest. Like the cooks from Central Europe, most Scandinavian cooks have prided themselves on simple forms of pastry making that include so called coffee breads, coffee cakes, coffee rings, sweet rolls, and buns.

German, Dutch, and Scandinavian immigrants brought their coffee cake recipes with them to America. Over time the recipes changed from simple bread-like to more sophisticated. Sugared fruit, cheese, yogurt and other creamy fillings are often used in today's American coffee pastry.

How To Cook Coffee Cake?